Here at Byrne's Garage LLC, we are tire experts. We care about you and you deserve the quality of BFGOODRICH® tires on your vehicle. In an effort to keep you and your family on the safest tires available, Byrne's Garage LLC sells quality BFGOODRICH® tires! Maybe you only think of us as your repair shop, but who else knows your car and your driving habits better than your mechanic?

When you need new tires to come to see what Byrne's Garage LLC has to offer. Not only can we repair or replace your tires, but our experts can also explain to you why your tires wore unevenly and make professional recommendations, adjustments or repairs to fix the problem so you get the maximum life from your tires.

Do your tires have uneven wear or did they wear out quicker than expected? When you install new tires you will also want to take advantage of our state of the art alignment service that will help to ensure you get the maximum life from your tires.

We also suggest you take advantage of our Nitrogen fill service for your tires. Using Nitrogen in place of regular compressed air improves tire wear and gas mileage. Nitrogen keeps your tires running cooler and does not leak off as fast as air.

At Byrne's Garage LLC we take pride in the high-quality BFGOODRICH® tires we install for our valued customers. Getting the best performance and life out of any tire requires that all the mechanical systems that affect tire wear are in good condition and set to proper specifications. The menu below will give you a brief description of a few of the systems you need to be aware of.

At Byrne's Garage LLC in New Albany, we pride ourselves on using only high-quality parts for your car, truck, or SUV. For this reason, among many others, we supply BFGOODRICH® tires to our customers here in New Albany.  Next time your car needs tires, come talk to one of our technicians at Byrne's Garage LLC. Once you see what expert service and quality products are all about, we’re confident you’ll come back for more.

CONTROL IN ALL SEASONS  Better snow traction than leading competitors.³

LONGER TREADLIFE ON- AND OFF-ROAD2²  Extends your adventure.

SHOP FOR BFGOODRICH® TIRES NOW AT Byrne's Garage LLC IN New Albany, IN 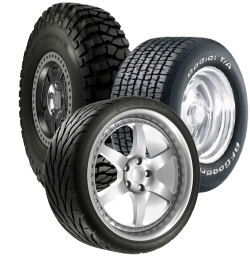 Why We Choose BFGOODRICH®

Passion, pride and performance are BFGOODRICH® values that have stood the test of time. As a maker of superior performance tires, they have been passionately performance-driven since the beginning.

Since the first BFGOODRICH® tire installed on a car in 1896, BFGOODRICH® has been a company of technological advancements and firsts. Henry Ford chose BFGOODRICH® tires for his first Model-Ts in 1903, and in that same year, a Model-T fitted with the same tires completed the first-ever coast-to-coast trip by automobile in the United States.

It’s what led them in the pursuit of creating truck tires tough enough to tackle some of the roughest terrains on the planet, yet still, maintain excellent road manners. That’s why more champions of the grueling SCORE Baja races have won with BFGOODRICH® tires and why the tire with more rock crawling victories bears the BFGOODRICH® name.

BFGOODRICH® 's performance prowess doesn't stop where the pavement starts. BFGOODRICH® street tires have racked up impressive accomplishments over the years — from creating the first street tire to capturing the pole position at the 24 Hours of Le Mans to creating an entirely new level of street tires, the extreme performance category. So, it’s no wonder why top driving schools like Ford Mustang Racing School and Skip Barber High-Performance Driving School, use BFGOODRICH® tires exclusively and why we choose BBFGOODRICH® here at Byrne's Garage LLC for our drivers.

Early Commitment to Research and Development

From very early in its history Dr. Benjamin Franklin Goodrich committed itself to research and development in rubber technology. Under the aegis of Benjamin Franklin Goodrich's son, Charles Cross Goodrich, the company opened the rubber industry's first experimental research laboratory in 1895. Arthur H. Marks, one of Charles Cross Goodrich's engineers were responsible for several breakthroughs in the processing of crude rubber. In its natural form, crude rubber is very sensitive to changes in temperature, becoming hard and brittle when cooled, and soft and tacky when heated. Vulcanization, a process first discovered by Charles Goodyear in 1839, mixes crude rubber with sulfur and heat to convert it to a durable material unaffected by changes in climate. At the turn of the century, Arthur Marks pioneered a procedure for devulcanizing vulcanized rubber, thus enabling producers to reclaim crude rubber from manufactured goods for re-use. Marks also developed methods for speeding vulcanization by adding certain organic chemical accelerators to the process. The use of such compounds reduced the time necessary for vulcanization by as much as 75 percent.

Charles Cross Goodrich continued to apply the latest technology to its tire production. In 1910 it introduced the first cord tire for use in the U.S. automobiles. This tire, which reduced fuel consumption and increased the comfort of the ride, was developed in Silver-town, England, and marketed there as the Palmer Cord. Charles Cross Goodrich purchased the patent rights for it in the United States and sold it to U.S. consumers as the Silvertown Cord. Other innovations in BFGOODRICH®'s tire manufacturing included the use of other organic compounds to resist deterioration by heat, oxidation, and flexing; and carbon black, a coloring pigment that improved the tires' resistance to abrasion.

Postwar Return to the Consumer Market

BFGOODRICH® avoided any postwar interruptions in its growth by quickly converting to meet consumer demand. The U.S. auto industry's return to peacetime production kept the demand for tires high, and BFGOODRICH® met this demand by introducing the first 100 percent synthetic rubber tire in 1945. Two years later it developed the tubeless puncture-sealing tire that increased motorists' protection from blow-outs. The company's LifeSaver and Safetyliner tubeless tires gained wide popularity in the early 1950s, and by 1955 tubeless tires became standard equipment on new cars. Ten years later BFGOODRICH® brought another innovation to the U.S. drivers, the first radial tires for passenger cars. The radial dramatically changed the U.S. tire industry by increasing tire life by up to 50 percent, and like its tubeless predecessor, it ultimately became standard equipment on U.S. cars.

BFGOODRICH® further diversified its production in the postwar era. Continuing a long tradition of research and development, it opened a new research center in Brecksville, Ohio, in 1948. BFGOODRICH® Chemical the company, a subsidiary founded in 1943, took over the company's wartime plants and built new ones in Marietta and Avon Lake, Ohio, and in Calvert City, Kentucky. Production of BFGOODRICH®'s Geon and Koroseal plastic products expanded into overseas markets with joint ventures in Britain and Japan. By 1955 BFGOODRICH® was manufacturing goods in five different areas, including tires, chemicals and plastics, footwear and flooring, industrial products, and sponge rubber goods. It had operations in 21 nations on six continents, and in 1966 its sales reached a record $1 billion.

Strategic Moves in the 1990s

With the full divestiture of its tire business, BFGOODRICH® became a company devoted solely to the production of chemicals, plastics, and aerospace goods. The recovery of its PVC business and the wise investment of capital gained from its tire division sale had in the early 1990s stabilized the company. But in 1993 chief executive John D. Ong sold off the PVC business, to the concern of investors, in favor of emphasizing the company's other chemical businesses.

Some analysts were skeptical of these strategic turns. Writer Zachary Schiller of Business Week, for example, noted that "The company has produced an average annual return on equity of just 1.4 percent since Ong became CEO in 1979, compared with an average of 14.4 percent for the companies in the Standard & Poors Industrials index." Moreover, the companies in the S&P index posted a 5.4 percent annual gain, but BFGOODRICH® sales fell an average of 3.5 percent per year, writing Schiller. The stock lagged at 44, not even close to its 1989 height of 69.

Ong, however, noted for his willingness to change course, pushed into aerospace, although the industry had been sluggish for more than a decade. He built on BFGOODRICH®'s aircraft parts and servicing business. Using proceeds from the sale of PVC, BFGOODRICH® acquired in 1993 Cleveland Pneumatic Co., a landing gear maker that complemented BFGOODRICH®'s wheel-and-brake business, and Rosemount Aerospace, which made sensors that measure flight and data (speed and temperature, for example). That same year also marked the additions of the Landing Gear Division and Landing Gear Services Division and Sanncor Industries.

Ong persisted with his current business mix, pointing out that the company was now positioned for growth opportunities. By 1994 the specialty chemical business started to show improvement, and the aerospace business held promise. The air-craft wheel-and-brake business gradually grew into aircraft parts and services. The following year BFGOODRICH® acquired QSI, Inc. in Greenville, South Carolina. In 1995 purchases included Hoskins Aviation and de-icing product lines and associated technology from Lucas Aerospace.

By 1996 BFGOODRICH® reported that earnings in 1996 were significantly higher than in the past three years. For the second year in a row, BFGOODRICH® Aerospace and BFGOODRICH® Specialty Chemical set records for sales and operating income. The growing demand for replacement products and services proved advantageous to the aerospace division, which also benefited from the upturn in new commercial aircraft production. BFGOODRICH® Specialty Chemicals acquired five businesses and increased manufacturing capacity at existing facilities. Moreover, three new plants were seen as the base for further expansion in Europe and Asia.

In the mid-1990s, Ong reflected on the last decade that took BFGOODRICH® from a struggling company that manufactured commodity products and sold them in highly cyclical markets to a streamlined organization focused on specialty businesses. He noted that the company's inclination for risk-taking lay within the BFGOODRICH® structure rather than outside. By late 1996 BFGOODRICH® shares reached "historic, 126-year highs" and trade at levels once thought unlikely, Ong said. He added that after challenges rocked corporate America in the 1980s and 1990s, BFGOODRICH® started reaching goals. Ong noted that market capitalization at the end of 1996 had increased by about 100 percent from the time the new BFGOODRICH® came into being at the end of 1993.

Shop BFGOODRICH® tires for driving in New Albany, IN, and areas near and far.  Whatever thrill you’re chasing, BFGOODRICH® tires will make sure your vehicle’s up to the challenge. The question is: Are you driver enough?